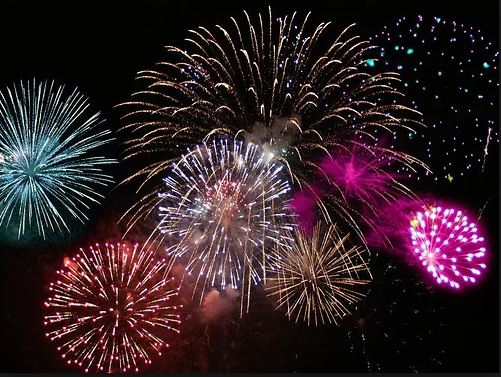 The island famous Spot, located at 3204 Seawall Boulevard with open air deck seating is a great place to grab a bite to eat and watch the parade go by and then the awesome fireworks over the Gulf.  Galveston Brick House Tavern & Tap, located at 3502 Seawall Boulevard is another great spot with open air, covered seating to watch all the action. You’ll be able to see the fireworks in front of By The Sea Condominiums at 7310 Seawall Boulevard, but you won’t be able to hear them.  Hearing the bursts go hand in hand with the visual effect.

The Galveston Community Band and friends have teamed up with the Hotel Galvez to present patriotic music before and during Galveston’s July 4th fireworks show. The band is performing from 8:45 p.m. through the conclusion of the fireworks.  Bring a chair or a blanket and settle down on the lawn of the Historic Hotel Galvez, 2024 Seawall Boulevard for live music and fireworks. This is free to attend and always a fun family time.

By 5:30 P.M. on July 4th, City crews will begin closing streets and detouring traffic in the immediate vicinity of the parade route. Vehicular traffic headed eastbound on Seawall Boulevard will be diverted north on 61st Street and westbound traffic will be diverted north on 23rd Street. Temporary “no parking zones” along Seawall Boulevard will also be in place for both the parade and fireworks display.